The 4 Types of Joint Ventures – Which should you choose 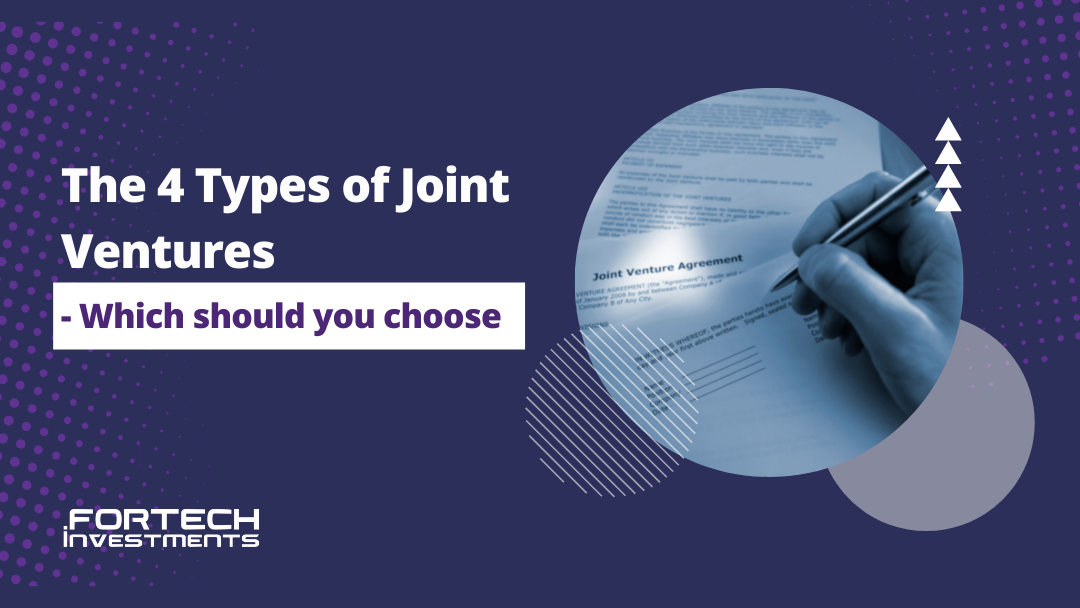 When both parties are aligned on goals and expectations, and everyone knows what and how they are going to contribute to the joint venture, this type of partnership becomes a powerful business growth tool that benefits everyone involved. It can take various shapes, between big and small businesses, corporations, start-ups, schools and even competing companies and they are highly successful, especially when knowing what are the types of joint ventures to chose from and which is best for whom.

What exactly is a Joint Venture and how does it work?

A Joint Venture is a strategic partnership between two entities, businesses or people where they share resources and expertise to achieve a common goal. Usually, the partnership takes the form of a business, designed for profit.

From a structural point of view, there are three different types of Joint Ventures – Corporations, Partnerships or Limited Liability Companies (LLCs). The difference between the three are about how the responsibilities are shared.

Who are Joint Ventures for?

Almost anyone can enter into a Joint Venture agreement and benefit from it. This is mainly because Joint Ventures are not a one-size-fits-all type of approach, but because they are flexible both in structure and in purpose. Anyone can and should enter into a joint venture partnership, especially if they’re looking to:

What are the 4 types of Joint Ventures you can choose from?

When deciding whether to enter a Joint Venture or not, remember to only look at this partnership as a tool that helps you achieve your business goals. Never as a goal in itself. By having set clear goals, you will know exactly which type of Joint Venture will help you achieve them.

This is a simple and pretty common type of Joint Venture, where the entities are partnering up with one specific goal in mind. The goal is usually about the execution of a project or the development of a service that will be offered by the two companies.

Since the purpose of this type of joint venture is the completion of that project, the partnership ends when the project is over and the companies can continue to do business as usual after that.

In most cases, Project-Based Joint Ventures are created between companies that can complete each other’s assets for the project, as you will see in the example below.

In Project-Based Joint Ventures, each entity is looking for a partner that can complete its capabilities in order to complete the project while managing to leverage resources, combine expertise and maybe even save costs.

A common type of project-based joint ventures takes form between businesses and universities, when the latter provide the research work and findings which can be used in the development of a product by the company. The company can also fund the research which is something that benefits the university.

A pretty recent example of this type of Joint Venture is the partnership between Volvo and Uber which started in 2016 with the purpose of developing Volvo self-driving cars with the help of Uber’s self driving system. After a few prototypes, they produced the Volvo XC90 SUV in 2019 which is exactly that – a Volvo base vehicle with key features that allow the installment of Uber’s self-driving system.

A very simple and common example you will find offered for this type of Joint Venture is between a company which owns certain types of property or intellectual rights and has no money and a big company that not only has the money to help the first company commercialize the rights but can also promote them to its enterprise clients. Both companies benefit – the first one gets its products and services on the commercial market or in front of relevant customers while the big company extends the offering to better serve its client base.

If you are ready to enter a Joint Venture to grow your business or you are just looking to inform yourself about the most powerful business tools and processes, subscribe to our newsletter to stay ahead of the curve or to find your next business opportunity.

This specific type of joint venture takes place between two entities that co-exist in the same supply chain, usually as buyers and suppliers. When they partner under this type of joint venture, both companies benefit, as well as the business itself and even the customers. Not all involved might benefit the same, but everyone can still achieve their business goals if they are set correctly. For exemple, the supplier might gain more while the buyers gains less. At the same time, the final customer will still win, because by pooling resources, the companies can produce higher quality products for smaller prices!

Usually, the Vertical Joint Venture partnerships are created between supplier and producer or producer and retailer from the same supply chain.

CCBPI (The Coca-Cola Bottlers Philippines Inc. (CCBPI) is a famous Joint Venture company between San Miguel Corp, Philipino beer giant and the Coca-Cola co, the producer of the famous beverage. The Joint venture was created so Coca Cola could have direct ownership over one of the biggest producers of its bottles in Philippines. Later, in 2007, Coca-Cola bought the full ownership of the bottling plant and this means that it took over a bigger part of its supply chain in the whole country.

Simply put, this is the type of partnership that direct competitors can enter into if they find opportunities to benefit each other. If we kept mentioning how a lot of aspects come together for the success of the joint venture, this is especially true here if they want to avoid disputes and opportunistic behaviors. Make sure that everyone knows what they’re getting into, between entering this type of joint venture.

SkyTeam Cargo is the only alliance between air cargo companies and it was founded in 2000, between four different airlines – Aeromexico Cargo, Air France Cargo, Delta Air Logistics and Korean Air Cargo. The main purpose of the alliance was to help the companies cut staff and fuel costs and to split profits. They entered the agreement because they had multiple aircrafts with lots of empty seats and by operating on a larger scale they not only managed to benefit their companies but their customers too which received more value for smaller costs.

The SkyTeam Cargo Alliance still operates to this day and it now has 11 companies involved. Throughout the years new ones entered while others left the partnership for various reasons.

Previous Post
What is a Joint Venture? Definition, Types and Examples
Next Post
Smart money for your start-up – What is it and how to get it